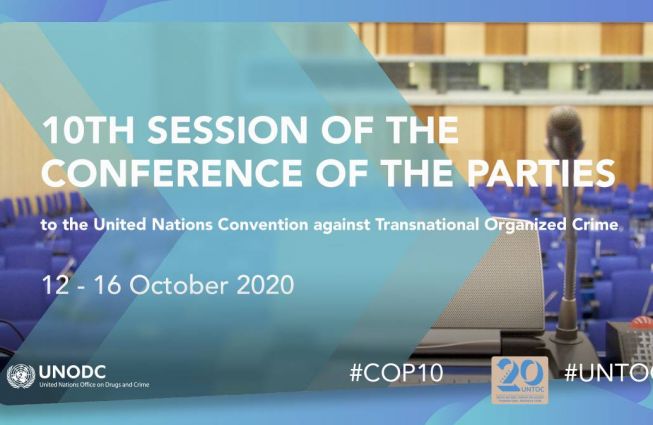 As this is the first time our delegation is taking the floor, allow me to congratulate you, Ambassador for your election as the President of the 10th Conference of Parties to the UNTOC.

20 years ago, the United Nations Convention Against Transnational Organized Crime has entered into force. For 20 years the state-parties worked towards creating viable mechanisms to effectively fight against transnational organized crime in all its forms and shapes at national, regional, and international levels.

In some areas we have advanced nicely, while in others we still have work to do. Especially when it comes to such serious crimes as corruption, money laundering and its clear linkage with financing of terrorism. In these areas we cannot see yet the strong political will at the state level to move forward towards a common goal.

Which is not surprising, since there are state parties to the UNTOC, which do not shy away from using various corruption and money-laundering schemes to promote their narratives, including to cover up their abysmal records in human rights, democratic governance and the rule of law.

A real example of links between such serious crimes as corruption and money laundering and terrorism we can see now in our region. For the last two weeks Armenia and our whole region is facing with the emergence of the threat of terrorism. Foreign terrorist fighters recruited from Syria and Libya were transferred to our region, becoming the proxy weapon in the hands of some states to advance their expansionist policies in the South Caucasus. This is a very serious threat to the safety and security of all the people of the region and we draw the attention of the conference and the state-parties to this extremely troubling development. We can already speak about a pattern here, when the terrorist fighters and jihadist groups are being used as a mercenary army to fight battles in different parts of our wider region.

And for this purpose, for sure, different criminal mechanisms are being employed for financing, transporting, and deploying such terrorist fighters to different regions. This new phenomenon, if not addressed in a proper and timely manner will become a new menace for the international community for the years to come.

As a representative of a nation, whose cultural heritage due to obvious historic events, is scattered around the world, Armenia attaches great importance to the issues of combating crimes against cultural property, to prevent and protect the world cultural heritage from further damage and destruction and to reinforce member states responsibility in this field.

We therefore welcome the initiative of Egypt to adopt a resolution related to crimes against cultural property.

We understand that those issues cannot be addressed in this meeting. However, we believe that without finding a comprehensive answer to those issues and without putting viable international mechanisms to hold a state-party to the UNTOC responsible for its actions thus ending impunity for the crimes committed, we cannot ensure the success of our joint efforts to combat different forms of transnational organized crime,  including within the context of its growing interlinkage with terrorism.

Armenia is ready to engage in a constructive and cooperative manner with all state parties with the objective of further strengthening of mechanisms and tools at disposal of the international community provided by the framework of UNTOC.